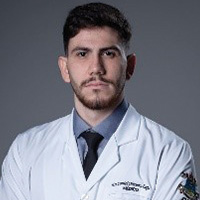 Parkinson’s disease (PD) is a chronic and progressive neurodegenerative disease, standing as the second most prevalent neurodegenerative disease in the world. Ten to fifty new cases per 100.000 people are diagnosed every year, being the male elderly the most affected by it. Case Presentation: A male patient, 63 years old, diagnosed with PD, presenting severe tremor, mainly in the
left limbs, rigidity and mild bradykinesia, refractory to drug therapy. Nine years after the diagnosis, he underwent surgery for a thalamotomy, aimed at the Right Ventral Intermediate Nucleus (Vim), with full motor sympthomatology recovery. Nine years after this ablative procedure, in 2017, the patient presented with hypomimia, hypophonia, muscular rigidity, bradikynesia and resting tremor. Due to the return of the motor symptoms, the patient underwent another surgery. This time, a posteroventral pallidotomy was the chosen ablative surgey. After the surgery, a significant motor symptomology reduction was noticed, mainly in the left limbs. Discussion: A bibliographic study about PD’s history, the circuitry involved in its physiopathology and its treatment, mainly surgical, was carried out. A cost-benefit analysis regarding Brazil’s public healthcare system, the country’s social and economic reality how it influences on whether Deep-brain-stimulation or ablative surgery   should be the treatment of choice for the case was also . Conclusion: Ablative surgery should remain as a therapeutic option for PD due to its safety, low cost, and high effectiveness to improve PD’s motor symptoms.

Daniel Zago is a physician who recently graduated from Pontificial Catholic University of Goiás, certified ACLS and BLS by the American Heart Association and has a wide range of research areas. He now works as a ER doctor at Saint Helen’s Hospital in Goiás.